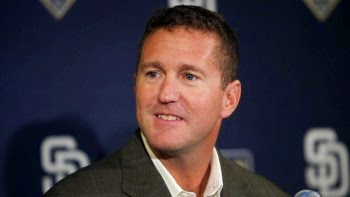 The team announced the dismissal in a release Sunday, just minutes before the Padres were to face the Los Angeles Dodgers.

Ownership has expressed a desire to have a more competitive team year in and year out.

“This ownership group is committed to fielding a team that consistently competes for postseason play,” said Padres President and CEO Mike Dee. “Thus far this season, the results on the field have been mixed at best and clearly have not lived up to expectations. After a lengthy evaluation of every facet of our baseball operations, we have decided to make this change today.”

“The search for a new General Manager begins immediately,” Dee said. “We are looking for someone who can define, direct and lead this franchise’s baseball philosophy for years to come.”

I don't think this will make a difference in the team's performance for the rest of the season as I suspect manager Bud Black will be the next to go and some of the team's high priced veterans will be traded.
Posted by Unknown at 5:27 PM